commissioned by the british textile biennial

Commissioned by the British Textile Biennial, curator Alex Zawadzki invited three artists with colonial narratives visible in their practice to enter a dialogue with her and with each other in order to develop the parameters for a group exhibition that responded to the ‘Cotton Exchange’ in Blackburn, now a semi derelict space; it had once been ‘the stock exchange’ of one of the country’s wealthiest towns of the Industrial revolution as a consequence of weaving and cotton production. Each exchange that passed through the hands of mill owners added a new layer of colonial violence, through appropriated cultures, enslavement, false promises, stolen lands and resources.

Developed over a twelve month period of zoom calls, discussions, provocations and curatorial conversations the artists confirmed their works and installed the exhibition despite the challenges of geography, local, national and international lockdowns to deliver a headline exhibition for the Biennial.
The British Invasion is three artists articulating their inherited and lived experiences of colonisation; sharing these experiences through the lens of both the colonised and coloniser. They consider the ongoing cultural, social, identity and behavioural impacts of colonial history on the current mainstream. How objects of desire, sports and entertainment were often used as a form of distraction and subterfuge by the British, in the colonisation of foreign nations; before becoming embedded in cultures and re appropriated in music, fashion, sport and language.

Through these works and shared dialogue, Jamie Holman, Masimba Hwati and Jasleen Kaur pick away at the subtexts of colonialism through personal stories, leaving us to sit with the unresolved mess left behind.

Found scribed onto the windows of a Lancashire gambling arcade, the expression ‘Colonial Amusements’ is a provocation that steered Jamie Holman’s artworks in ‘The British Invasion’. He interrogates how pop music, fashion and sport hold the power of attraction and distraction, and their contrary co-existence alongside violence and conflict. Identifying the emergence of popular culture and the threads which lead us back to their colonial catalysts via the cotton mills of Blackburn, Jamie explores the founding of the football league by mill workers and the evolution of terrace culture, identity and clothing, exploring the complex relationship between class, colonialism and culture.

As a British-Irish man, this is woven into a personal story of his father’s tours of Northern Ireland, as a British soldier during the troubles. Jamie explores the tensions inherent in young people engaged in war and violence and others lured by night life, discos and football, proposing a space where these things overlap revealing young people caught up in extraordinary circumstances that are punctuated by the top ten records of the day, rituals of romance, dancing and dressing up before returning to conflict, violence and oppression. 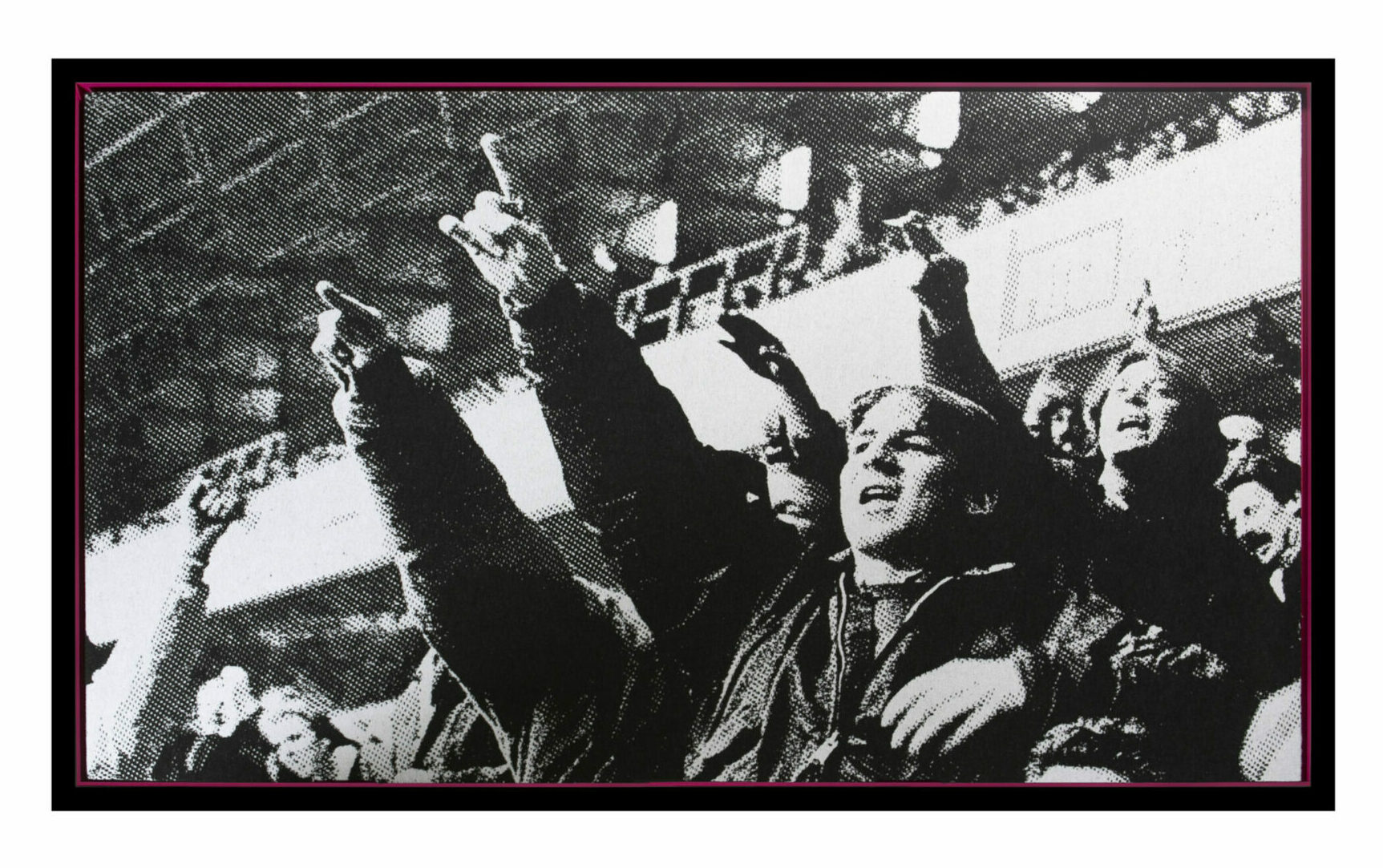 Commissioned by The British Textile Biennial. Aquired by the Government Art Collection 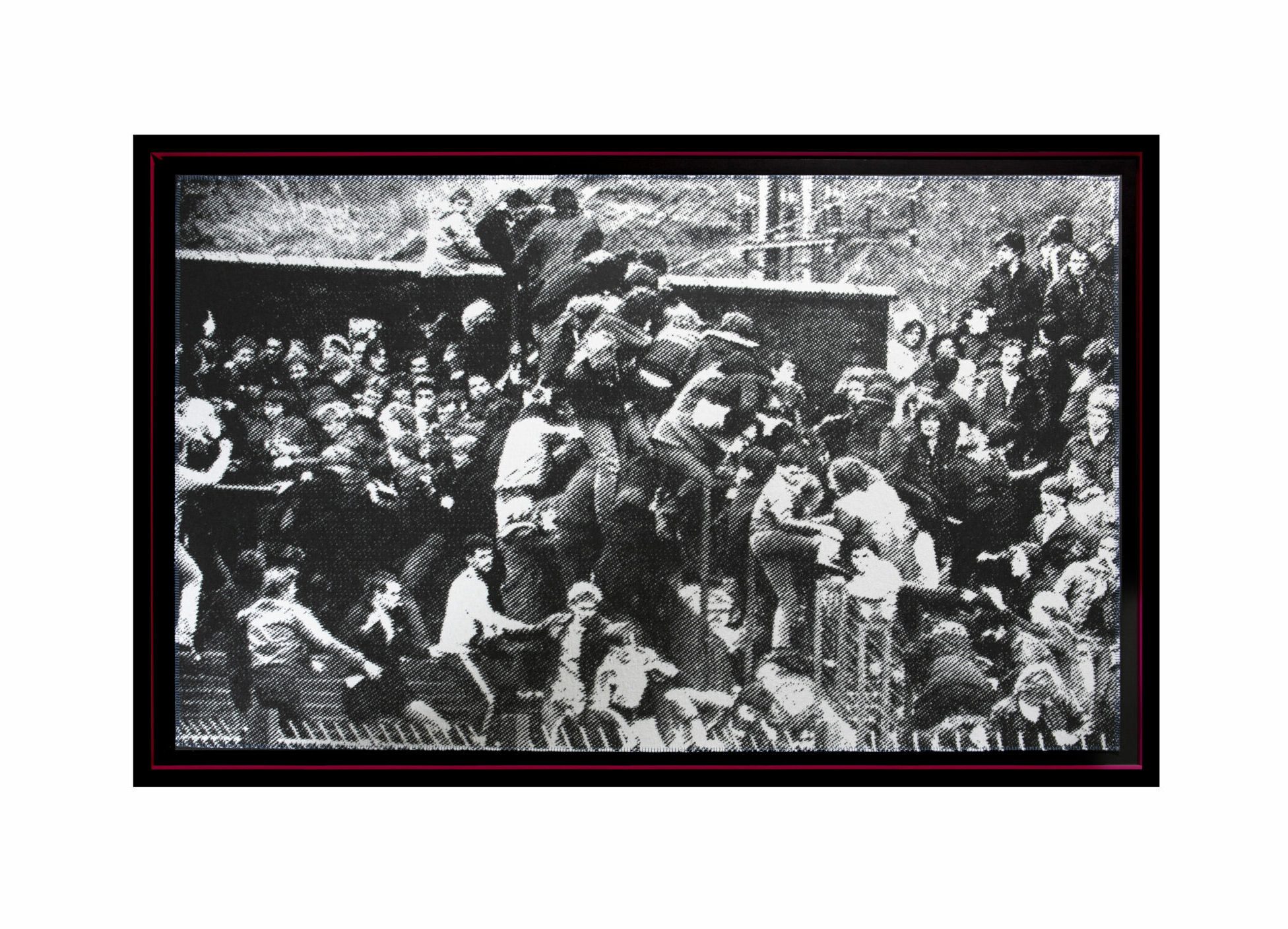 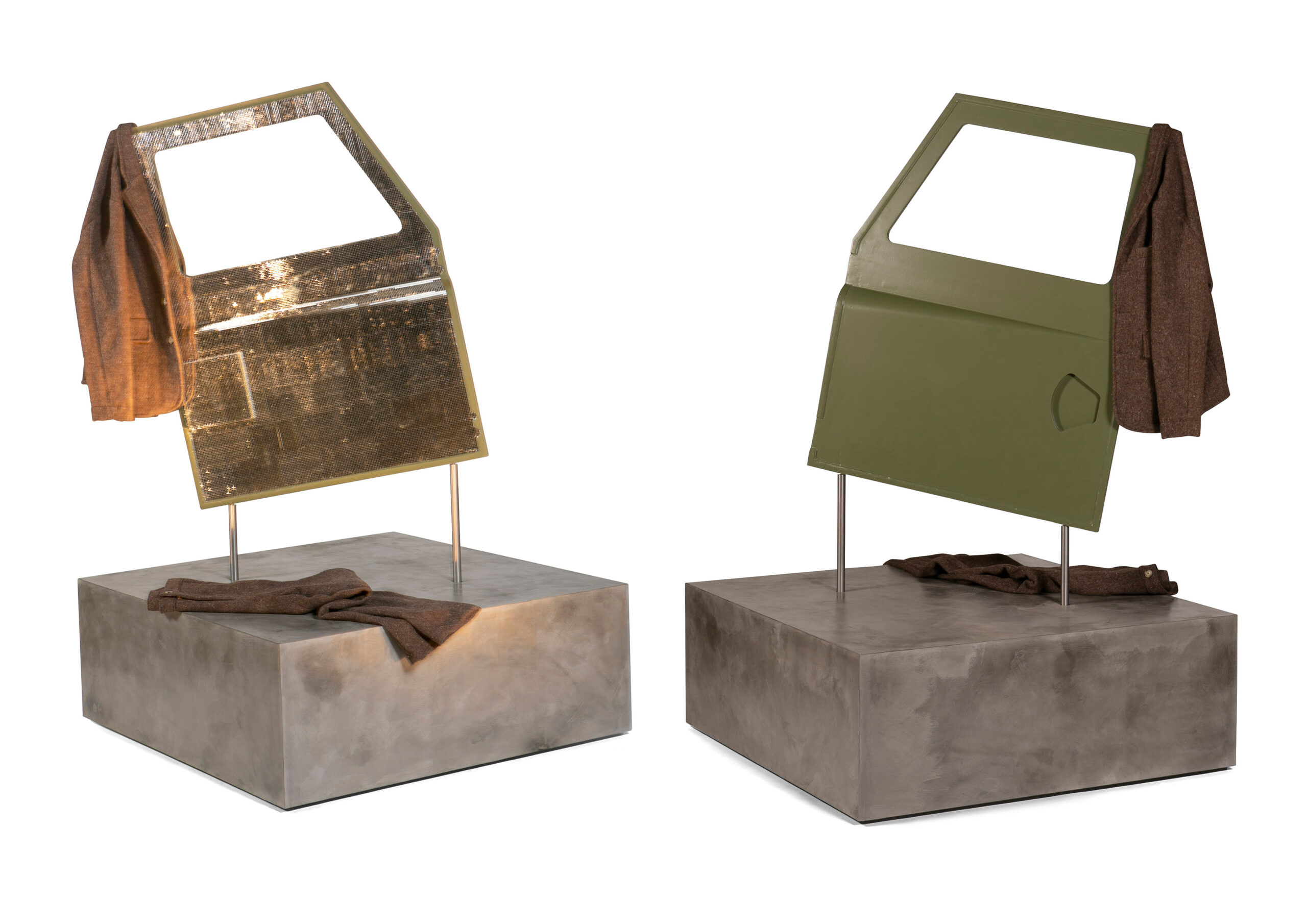 Everything Stops For Top of The Pops / Boys Keep Swinging, 2021 (front and reverse view) 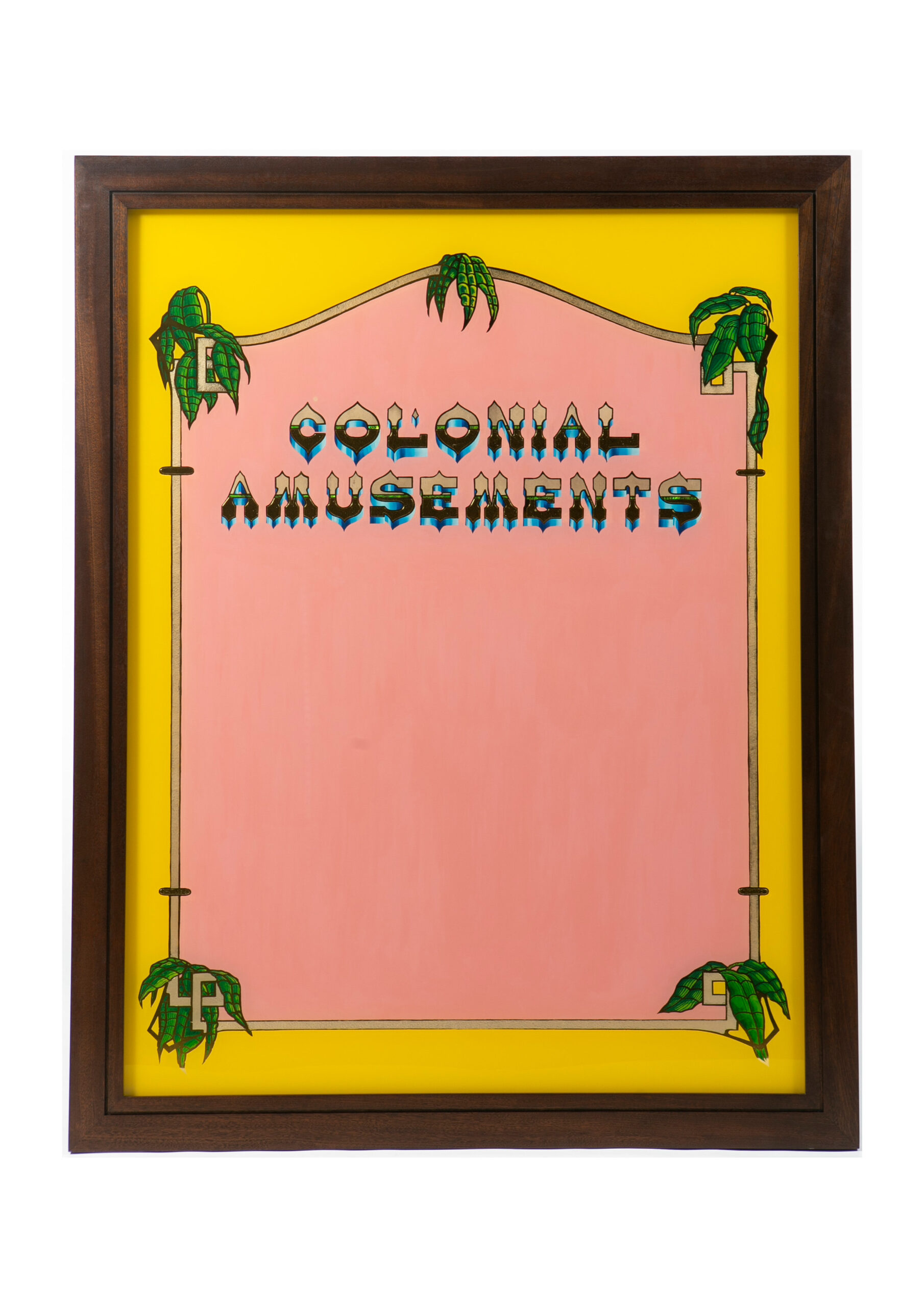 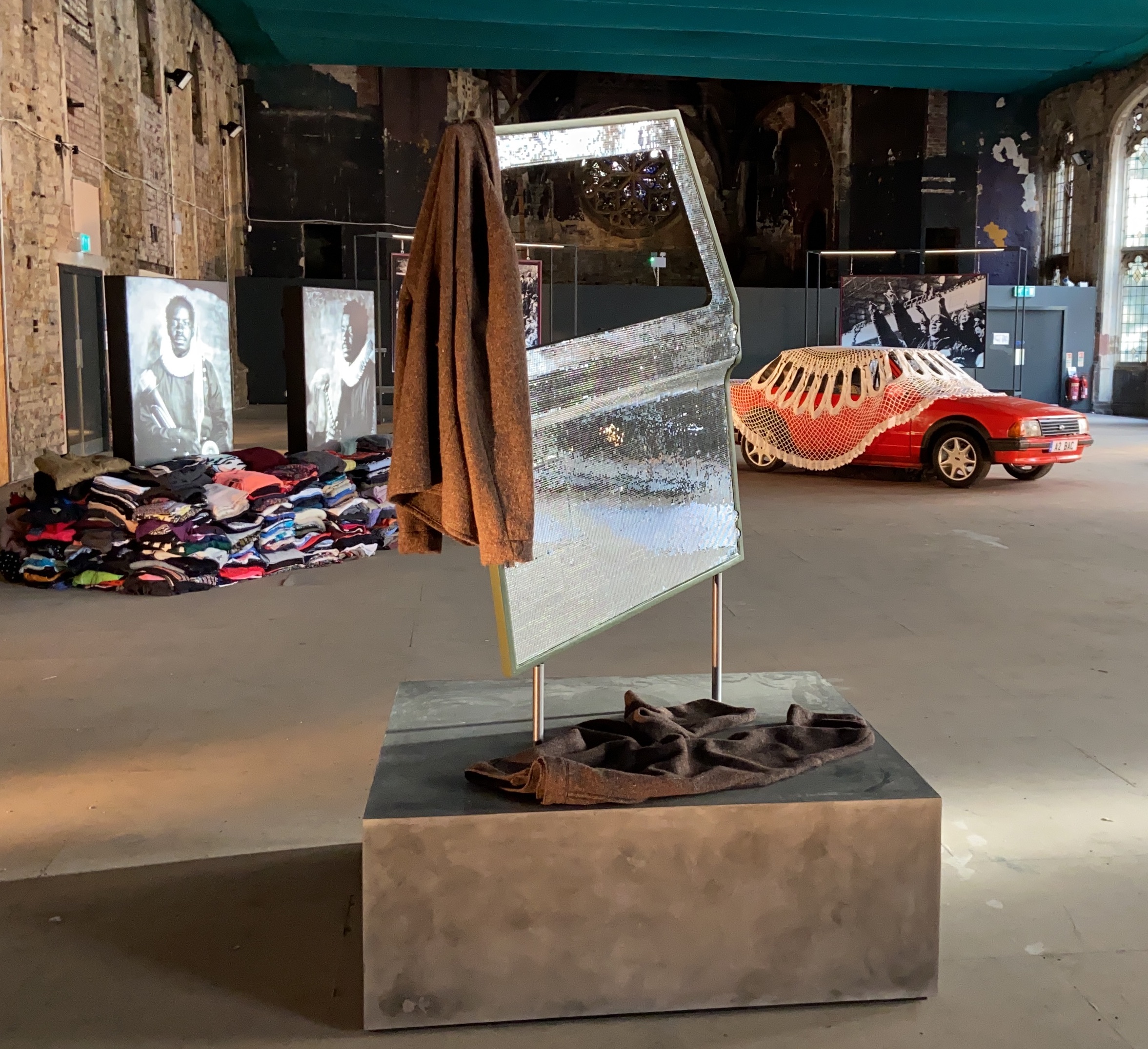 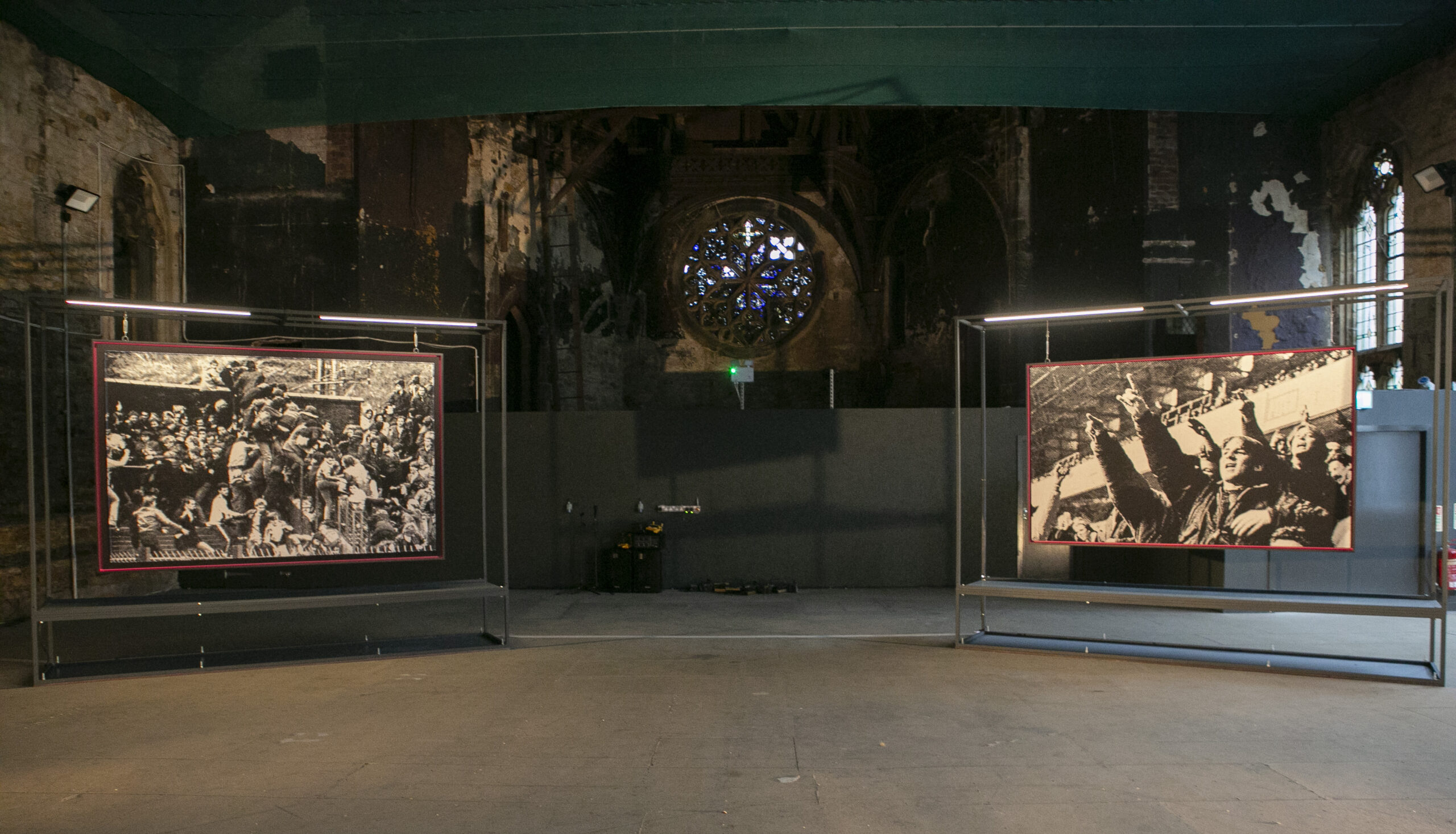 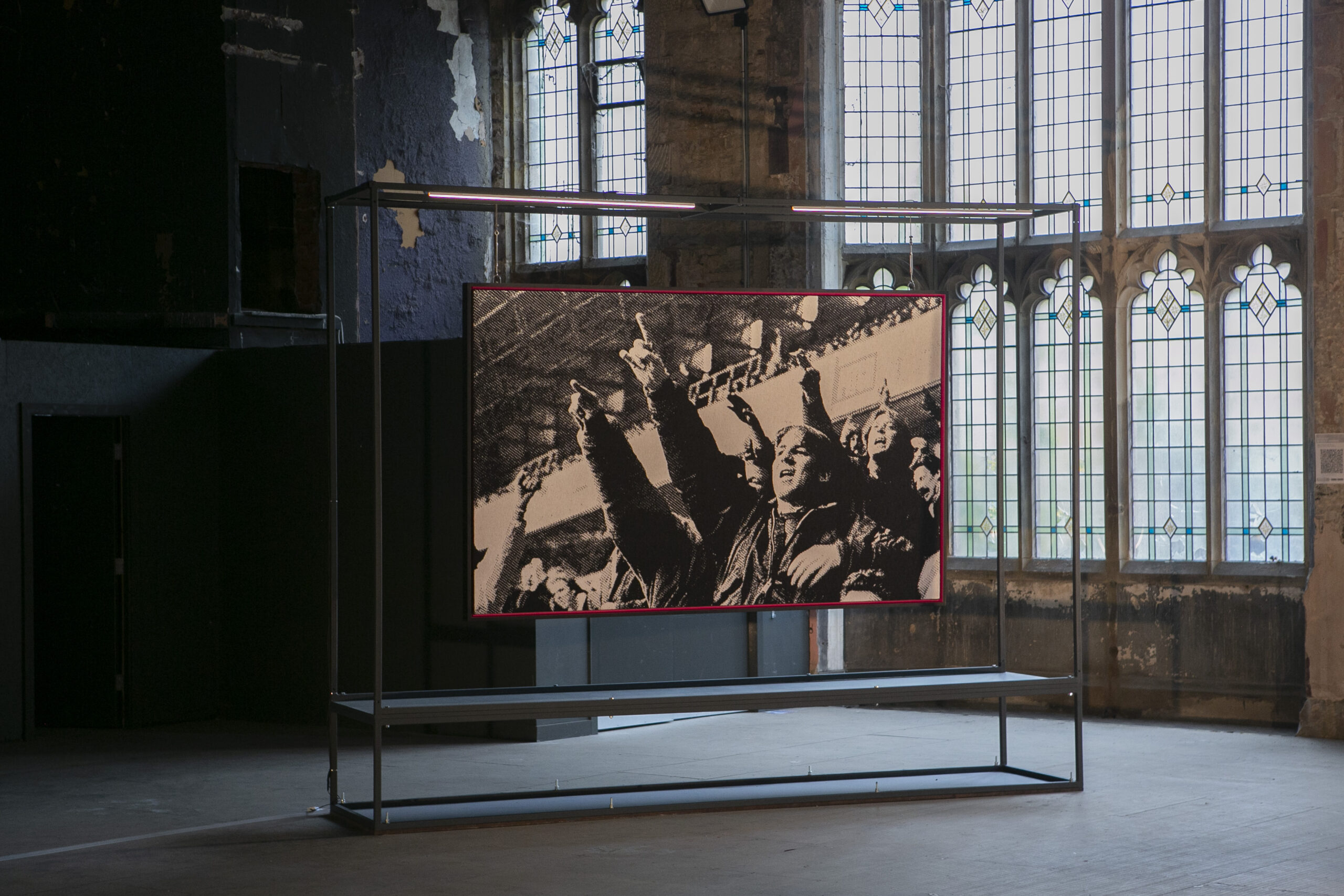 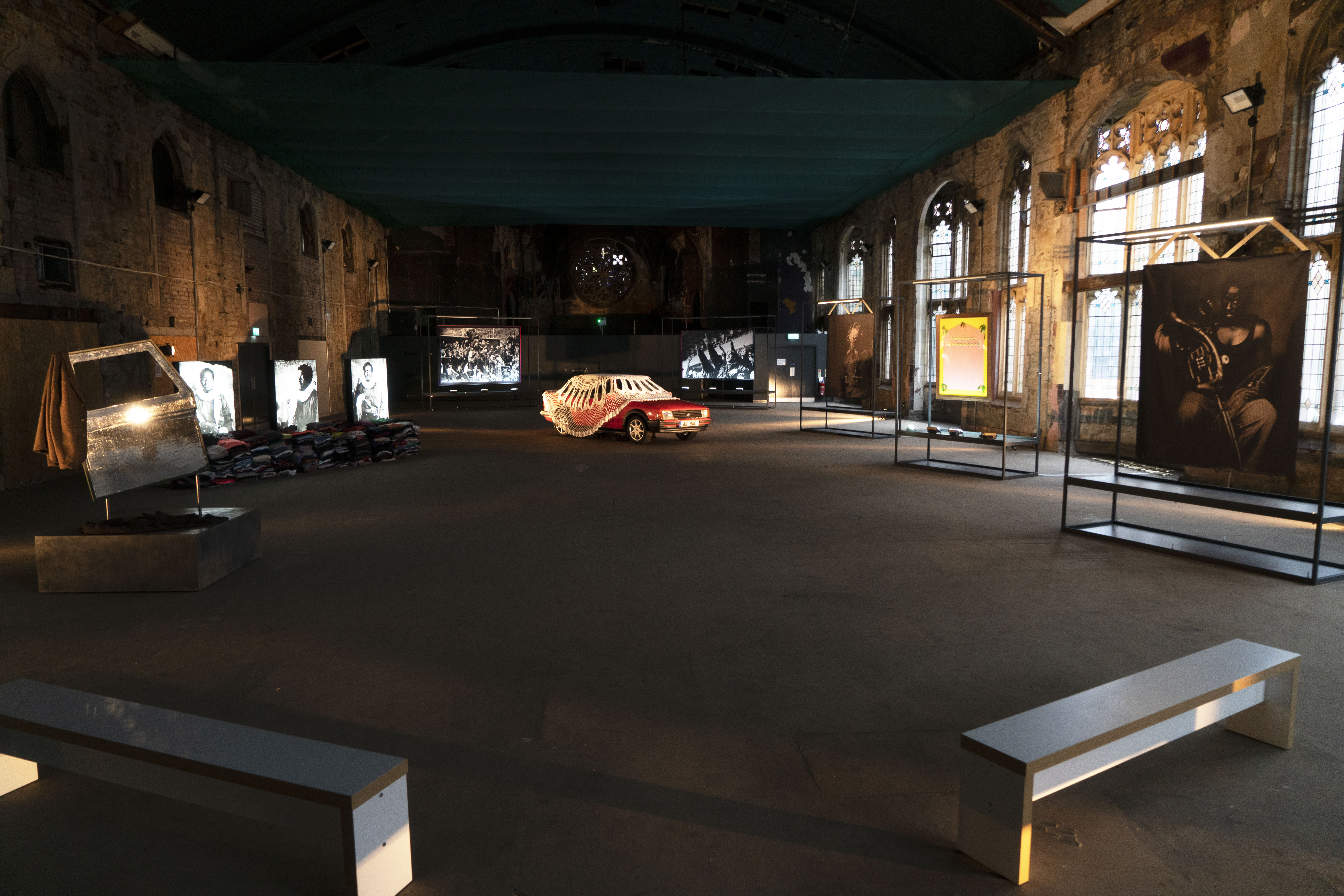 Commissioned by The British Textile Biennial. Installed at The Cotton Exchange, Blackburn Lancashire